…Just to name a few and keep privacity…

Not long after Hotel Playa first opened, Hollywood began shooting Westerns in the dusty town of Durango, 200 km northeast of Mazatlán. Movie stars and producers such as John Huston, John Wayne, and others began using Hotel Playa Mazatlán as a refreshing escape from the blistering set.land was dotted with salty lagoons and flocked with abundant waterfowl and deer. Mazatlán had a mere 40,000 inhabitants.

John Wayne was quite the man about town in Mazatlán. Six months a year, he moored his yacht, Blue Goose, in the downtown harbor. “The Duke,” as he was known to friends, made his classic Western movies near Durango, Mexico. 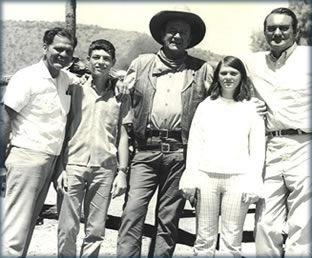 Rock Hudson (2nd from right), playing bridge under the palapas. Hudson ‘cut loose’ at Hotel Playa in between filming a western with John Wayne near Durango, Mexico. 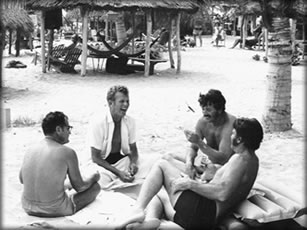 Robert Mitchum, was a longtime guest of Hotel Playa, coming down as much as 5 times a year. Like most stars, he relished his anonymity in this modest, coastal town. Mitchum loved the area’s pristine beaches and often frequented Copala, a charming village set in the nearby mountains. 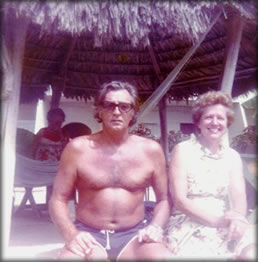