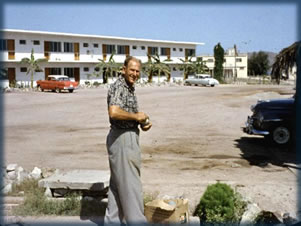 In the winter of 1952, California contractor Ulysses Solomon George came by jeep down the old, steep Durango Road to spend a few days in Mazatlan. He immediately fell in love with Mazatlan and soon controlled the choicest beach front, facing Isla de Venados, on a sandy track three miles from the town. U.S. George’s modest 40-room lodge eventually became one of Mexico’s favorite exotic destinations, the Hotel Playa Mazatlan

Long before the popular “Golden Zone” of Mazatlán existed, before the lavish resorts and restaurants, even before a basic road was laid—there was Hotel Playa Mazatlán. The year was 1954.In 1955 the Hotel Playa Mazatlan opened its doors for the first time; local workers and customers were trucked in over a dusty unpaved road that lead up to a secluded lagoon.Between the lagoon and the ocean was a thin strip of sand on which the Playa was constructed facing the nearby off-shore islands. Deserted beaches spanned for miles. 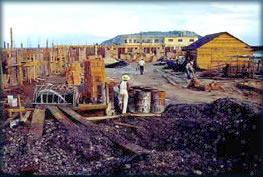 The land was dotted with salty lagoons and flocked with abundant waterfowl and deer. Mazatlán had a mere 40,000 inhabitants. When the news broke of a “Crazy Gringo” building a hotel beside the ocean, the local townspeople were skeptical. Why on earth would he build so far from downtown? Who would dare come? There wasn’t a drop of running water for miles, much less electricity, a paved road or sewage system.The city was served by a tiny airport, but incoming roads lay in disrepair, and bridges were still a novelty. Soon, the “Crazy Gringo” had grown quite a reputation for himself and his oceanside enterprise. Yet despite primitive conditions, his dreams for a seaside hotel were not far from being realized. In 1954, with the exception of the semifinished Hwy 15, there was not a single paved road or bridge in Mazaltán—much less in the entire state of Sinaloa! At the time, Mazatlán’s countryside was densely woven with lagoons, streams and wetlands. While automobiles were scarce, the few that passed through had a hard time navigating the rugged territory. Makeshift “bridges” were slashed together with dugout canoes and wooden planks, providing passage—albeit a rickety one!—for cars. Halfway across, a self-appointed official greeted motorists and haggled for the toll.

In the fall of 1955, Hotel Playa held its grand opening. The symbol of a deer became our classic hotel logo after the name Mazatlán which means “land of the deer” in Nahuatl, the native Aztec tongue. The hotel began as a modest, two-story building of about 80 rooms facing the ocean, dining facilities, and a saltwater pool—and it sat on an absolutely beautiful, secluded beach overlooking the Pacific and verdant, offshore islands. Almost instantly, the hotel gained appeal. 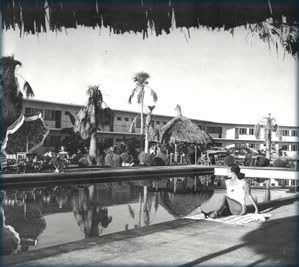 “Mazatlan…is a choice seaside resort with a splendid new resort hotel, Playa Mazatlán. It’s air-conditioned…with private balconies…gourmet food served from spotless kitchens, water is filtered and all milk is pasteurized…[visitors enjoy] the famed bathing beach of the very blue Pacific…a seascape of offshore islands….a luxuriant paradise of tropical gardens, where parrots flit, orchids bloom, and a filtered swimming pool beckons. Nights can be enlivened with starlighted roof-garden dancing or dining in the Chubasco Room. All this for $6.00, American Plan.” -Westways magazine, 1955.

By 1966, a third floor was added and our famous Fiesta Mexicana had its first show. Over the next fifteen years, as the hotel´s popularity grew, it was renovated and remodeled, creating 300 more rooms and virtually tripling its original size. Even today, we are continually refurbishing the hotel to meet a growing number of guests.

The landscape around Hotel Playa was once a very different place. The main pool was filtered saltwater and surrounded by a marshy jungle of trees, shrubs and shady huts with a view of a huge, green lagoon, rich in wildlife. With the Pacific ocean in the front yard and the lagoon in the backyard, Hotel Playa was almost completely bounded by water. Now, a main street, shops, offices, and restaurants fill the area where this wild lagoon once thrived.